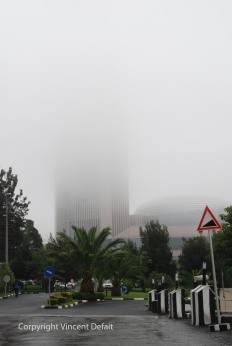 The Ethiopian capital woke up almost entirely covered with fog. One could not see hundred meters ahead. Weird feeling of being in european countryside in early November… but with old Ladas roaring, donkeys who don’t care about the trafic and orthodox worshipers coming out of the church after the mass. The good thing is that, even though people drove as bad as ever, at least they did it much slower than usually.

Even the new headquarters of the African Union – financed and built by China – seemed to have disapeared.